This  may not appeal to many readers. I’m scratching an itch that I’ve felt for years…

After years of research, countless focus groups, and intensive analysis of text, I know the answer. These are the best children’s books ever written:

A Fly Went By (Mike McClintock)

A Fish Out of Water (Helen Palmer)

I’ve read these books hundreds of times. At one point, I’d memorized all five. I made up songs to accompany three of them. I developed character voices, dramatic pauses, interesting asides. I read with earnestness, sarcasm, and resigned submission. These were family favorites: mine and my kids. They’re the best the world has to offer.

We’re a bookish family. Or a book-y family. Whatever. We like books. When Sophie was an infant, we lived in a swanky part of Washington, DC. Million-dollar homes (not ours), Saabs in the driveway (again, not ours—no Saab, no driveway), unlimited funds for kids’ clothes and toys (yes, that was us). Our fancy neighborhood had a public library. It was a couple of blocks from our home. Nestled between our neighborhood supermarket and our neighborhood wine merchant. A block up the road from Sophie’s day care. I must have walked past that library a thousand times. I remember going inside only once. It was cluttered, dreary, dirty. If we wanted a book, we drove to the clean and airy Barnes and Nobel just over the Maryland line to buy one.

Two and a half years we lived in that neighborhood with Sophie. During that period, we bought hundreds of books—including the five from my best-of list. And then we moved away. We moved to a town without a bookstore. A town with a beautiful library. A majestic building, large open spaces. It more resembles the Barnes & Nobel than our old library. And our years of financially supporting the American publishing industry abruptly ended.

It’s been twelve years since that move. Now, when I buy a book, I feel like I’m squandering my money. Book ownership makes no sense – a least for adults. The only reason I can think of to own a book is to loan it to a friend after I’ve read it. Much better to have a few community copies that we all share (says the guy who bemoans that less than one hundred people bought my book.

Kids’ books, on the other hand, beg to be bought. Kids, little kids, want to read them over and over. Toddlers love familiarity. They love tradition. And shared secrets. A well-read book creates a bond between the reader and the child that is strengthened each time the book is reread. 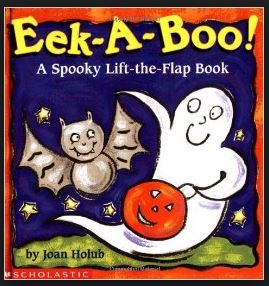 Eek-a-Boo: This is the biggest surprise on my list. It was never my favorite book; but I’m not a toddler. Because it’s a Halloween book, you would think we only read it for a few weeks per year. No. Eli loved this book. A sing-songy lift the flap book celebrating all things spooky. We read it every day for two years. Even the author, Joan Holub, would be dubious of this vote. I once emailed her to thank her for crafting a book that Eli loved so much. I suggested that Eek-a-Boo book belonged in the realms of Eric Carle’s Brown Bear, Brown Bear. Her response: “Oh, thank you, it’s a nice little book.”

Because the kids’ books are read so many times, their flaws glare. Dora Duck and the Juicy Pears is one of these books. It was translated from Dutch. Irritating to read. The story was fine, but the translation sucked. Many of the sentences were incomplete. Just a bunch of fragments. And not cool, edgy fragments like I use, but confusing, half written sentences. The family who lived behind us in DC was Dutch. I once hung out at a youth hostel in Santa Fe with a group of college students from the Netherlands. Every Dutch person I’ve ever talked with has a better command of English than I do. I have no idea how an internationally exported Dutch hardback picture book got published with so many mistakes. 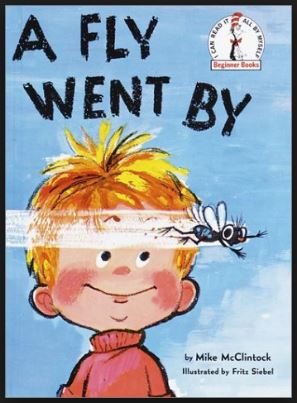 A Fly Went By: This book could easily have settled into family obscurity and then disappeared during an early book-purge. I bought it because I remembered it from kindergarten… thirty-five years earlier. Since the story was memorable, I assumed it must be a good book. The first few times I read it to Sophie we quit halfway through. It’s unreasonably long, and it has several redundant passages recapping the action. Those passages are its glaring flaw. They make the book boring. They elicited a big sigh every time I faced one in the book. Then one day I turned them into a song. Suddenly A Fly Went By was a family favorite. A book Sophie chose because it was long. It was now fun. I also changed the ending by killing off the fly. More fun!

Everyone thinks they can write a Children’s book. All you need to do is throw together some catchy rhymes and find an illustrator. I hear it all the time. “I’m thinking of writing a children’s book.” The temptation is obvious. $12.99 or more for a two-hundred-word story.

I’ve tried. I’ve had “Gassy Ghost” kicking around in my head for the better part of a decade. I even know a talented illustrator whose style matches my vision. I just can’t get started. When I came up with my idea, writing the story seemed like the easy part. I thought it would take a few hours. But when I tried, I stared at an uncomfortably blank screen for an hour and then quit. I’ve never tried again. Apparently, there’s more to it than I suspected. 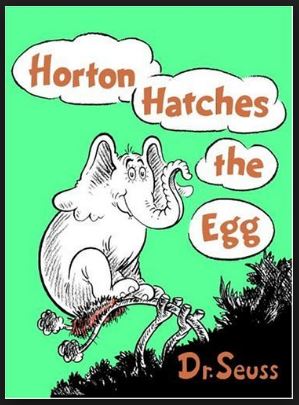 Horton Hatches the Egg: This is the lessor known prequel to Horton Hears a Who. It’s easily Seuss’ best story. Unlike pretty much everything else he’s written, Dr. Seuss crafted a clean, well thought out story without relying on redundancies and made up words. This Horton book is serious and uplifting and thoughtful. The action ranges from a secluded African jungle to a treacherous ocean voyage to a kitschy American carnival. The tumbling rhymes are created with care and never seem forced. And the storytelling is first rate. Every stanza advances the story, provides important information, and delights the reader (and the reader’s audience). This might be the best story ever written.

Because a picture book is a snapshot in time, the useful life of the book is limited. It will quickly become dated and irrelevant to potential future-buyers. Look at Winnie the Pooh. Growing up, I thought Christopher Robin was a girl. He even wears a dress! Paddington bear? No one’s going to read that crap. It looks like it’s from the fifties. Oh wait, it is.

Smart publishers go with a minimalist motif. An example is Harold and the Purple Crayon. It can’t become dated because everything is just a child’s stick-figure drawing. Plus, it’s an important book, a book with a secret. Harold is God. The book is metaphorical for the biblical creation story. But I seem to be the only one who knows this. 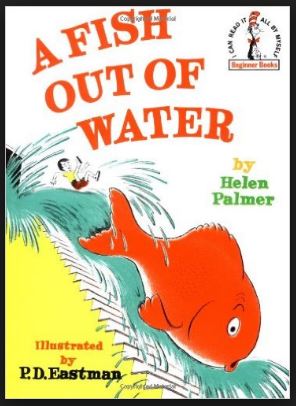 A Fish Out of Water: This book actually came from that unappealing DC library I wouldn’t go in. I bought it at a Saturday morning sidewalk book sale. While I think it’s a top five masterpiece, the library felt they could let it go for a couple of bucks. Helen Palmer crafts a cautionary tale of Otto the goldfish and his misadventure from eating too much fish food. The story itself isn’t fantastic—the writing could easily be improved. But the art is great, and yes, it is crazily dated. But in this case it’s the yesterday-vibe that makes the book shine. A Fish Out of Water paints a portrait of 1961 suburbia as a time of innocence. And unlike most of the children’s books from the fifties and sixties, the adults are actually nice to the main character, a child. Usually, in these books, the adult characters treat kids as an annoyance. The male authors of this era portrayed adult characters who are, in general, bothered by the kids. Being written by a woman gives this book a completely unique perspective.

Growing up, there seemed to be just a few children’s book authors. Dr. Seuss, P.D. Eastman, and Margret and H.A. Rey wrote just about every book I remember reading as a child. At some point after I turned into an adult, a new crop of author/illustrators came along. Sandra Boynton and Eric Carle top this list. Sandra Boynton sprung out of the greeting card industry in the late seventies. And Eric Carle, while churning out books my entire life, never once crossed my path until I started buying books for my brothers’ kids. These new authors were fresh. The art was different; the action was different; the rhythm was different. These books are modern. No more dads in skinny ties and moms in poodle skirts. No more cops and construction workers chasing kids away. 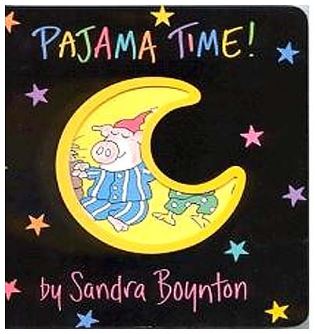 Pajama Time: It’s Sandra Boynton’s best, and my all-time favorite. As the reader, it’s impossible not to turn the story into a song. Susan and I have always read it the same way, learning from each other during those sleep-deprived pre-dawn hours with our newly-aware babies asking to read books. Once, a visiting friend wanted to read it to Sophie. She picked up Pajama Time and turned it into a song as well. It was a completely different song from the one Susan and I sing.

Pajama Time is a board book, but it hasn’t been condensed down from a longer hardback book like all the other board books. Boynton’s stories are written specifically for the little ones. They’re close to indestructible. Every Dr. Seuss book we own is held together with packing tape. We still have the copy of Pajama Time we got when Sophie was born, and it’s virtually unmarred. It’s in a memory box: mine, not my kids. I’ve read it hundreds of times, and I still love it. I haven’t picked it up in five years but I can recite the whole book from memory. The pictures contain little jokes to accompany the story. Pajama Time is a modern book created with a modern sense of humor.

Usually while writing about products made for my kids, I’m deep in a rant. This essay is unfamiliar territory for me. It’s the opposite of a rant; it’s an anti-rant. I owe a giant debt to the authors and illustrators who provided me so many memorable hours with my children. Squished together in an over-sized easy-chair, sharing a well-written story. One day, when Gassy Ghost is complete, I’ll receive that email from a strung-out dad who has just read it for the fifty-eighth time in four days. But he’ll still thank me for writing the book. That will be my proudest moment on earth.

Follow The Other Stuff on WordPress.com
Join 4,432 other followers