The Fairyland Loop. A sickly-sweet name for a trail; evoking images of a four-year-old girl skipping down a grassy path in her ballerina outfit.

One week into my family vacation, my legs were itching for punishment—my heart and lungs had taken plenty of abuse, but only due to the elevation. Susan, my two kids, and I spent an outdoorsy vacation in the American southwest: Arizona’s Grand Canyon North Rim and Utah’s Bryce Canyon; with flights in and out of Las Vegas.

The Fairyland Loop would serve well as that punishment. But first I had to get there.

The first two days of vacation were a non-stop headache. Elevated altitude? Pathetic! Vegas is only two thousand feet above sea level. Could it be the crappy food and heat? Both are abundant there. Maybe the crowds and traffic? Or sharing a hotel room with my kids. That could easily be the culprit.

As the daily pounding—reminiscent of a hangover—began to abate, we moved on to the Grand Canyon: an elevation of 8,000 feet. My headache was refreshed, and now just walking the quarter-mile from our cabin to the lodge left us each gasping for air.

This was a hiking vacation, or so we planned. My kids, ages ten and thirteen, would easily be up for two or three hikes each day. With the whole vacation planned and booked by early February, we had months to prepare. Taking just one family hike per week throughout the winter and spring would yield over twenty training hikes. We would hit those canyon trails already fit.

Susan and I took a similar trip to Arches National Park (sans kids) a few years ago. We enjoyed one or two mid-length hikes each day over our five-day trip—totaling around forty miles. I was looking for a repeat, but this time as a family. 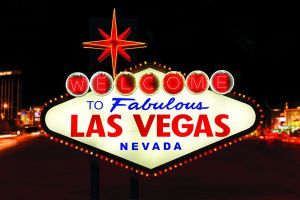 But first we had to gut through Vegas: those headaches… and the cars… and the people. Susan and I spent our early careers in DC. Standing-room-only commutes on the Metro, jockeying car rides up DCs wide but hectic avenues, aggressive positioning at a bar or a live music show. We were city savvy. Able to navigate a mob with little stress or trouble.

Eleven years ago, we moved to Gettysburg. Its motto is “The best known small-town in the world.” Let’s focus on the small-town part. About 7,000 people in the town itself; a small band of neighborhoods encircle the borough; and then the rest of the county is primarily farms and small clusters of community. “Rush hour” is worrying whether the traffic light might change before you can make your left turn.

We’ve grown accustomed to empty space, undeveloped land, and pristine views. And Vegas doesn’t have these. It has glitter and noise, and especially sprawl. It’s hot and ugly with a sea of cars. Everything off the bright and shiny strip is the same shade of orange-beige. The ground, the homes, the high cinder-block wall surrounding any neighborhood where the residents are wealthy enough to afford it. Everything’s the shade of a Marlboro cigarette butt faded by weeks in the relentless Vegas sun. Oh, right, we saw lots of cigarette butts, too.

Driving out of Vegas, we found the southwest we traveled for. Mountains, unspoiled desert landscapes and a rapidly dropping temperatures. Arriving at North Rim, the few people hanging around the Lodge were in stark contrast to those we just left behind. Unlike the Grand Canyon’s South Rim—a touristy day trip from Las Vegas—the North Rim is extremely remote. The closest town is almost eighty miles away.  There’s no Wi-Fi, no cell service and no TV. Tourist here have made a decision to get “away” from their modern life.

Hiking went poorly at the Grand Canyon. My family knocked out some of those training hikes since February, but nowhere near our goal of twenty. Six or seven might be a generous estimate. The two longer hikes we took at the Grand Canyon were a struggle. The heat, the elevation and the steep grades kicked our collective butts.

But my legs were craving mileage. While my kids were doing a mediocre job preparing for our hiking vacation, I was training for a June trail-marathon. That race has come and gone, and I’m now in that post-run gray-area where my body deserves rest and recovery, but I’m used to exercising in four-hour chunks. This is a period when marathoners bounce around looking for something to do with all their new-found spare time—and also pack on weight because their eating habits haven’t caught up with reality.

The Grand Canyon was relaxing and beautiful, but the hiking isn’t phenomenal. From the North Rim, there’s not much to do for family-hikers except walk down into the hole and then turn around and trudge back out. The myriad rim trails are fine but don’t offer much variety from the trails around the lodge. From our hiking-vacation perspective, the role of the Grand Canyon was acclimation to elevation for the non-stop hiking at Bryce. And, of course, my Fairyland Loop FKT.

Over the past few years, Fastest Known Times, or FKTs, have been showing up in mainstream news sources. I guess I credit Scott Jurek with his high profile “dash” of the Appalachian Trail—which is possibly the one FKT I refuse to accept. The A.T. is more than a distance to run. More than a race against the clock. It’s a lifestyle choice, a personal defining event, a self-supported “humanity against natural adversity” endeavor. Having someone waiting to hand off trekking poles as the terrain starts to climb steals something away from the trail’s intent.

The A.T. FKT is held by Anish Andersen. She carried her own crap.

Bryce Canyon is magical. An obscure geological and meteorological history has left a terrain of mottled spires that closely resemble those Creamsicle ice cream bars from our childhood. As a desert junkie with limited travel experience, I’d call this the most beautiful place on earth. And the hiking, I’d place second, right behind Arches National Park, but only because I prefer to hike on rock. My family and I enjoyed a couple of hikes per day while we were there. Exciting, jaw-dropping sights on two-to-three-mile loops. But since I was still craving bigger mileage, I squeezed in a dawn run.

The Fairlyland Loop is one of the longer hikes within the park. A continuous eight-mile loop descending to a river bed; gobbling up some rolling and rollicking terrain; and ultimately climbing back up to the canyon rim. It was the trail that the visitors’ center ranger recommended running. Because of the length of the hike, almost no one does it. The visitors at Bryce were mostly families and seniors. Everyone was looking for shorter, shadier hikes.

On my morning run, I saw seven or eight people in total. Besides the long climbs and the relentless sun, there’s nothing difficult about this trail. The surface is relatively rock-free, and it’s impossible to get lost.  But many of those climbs left my tongue hanging down like a worn out puppy. 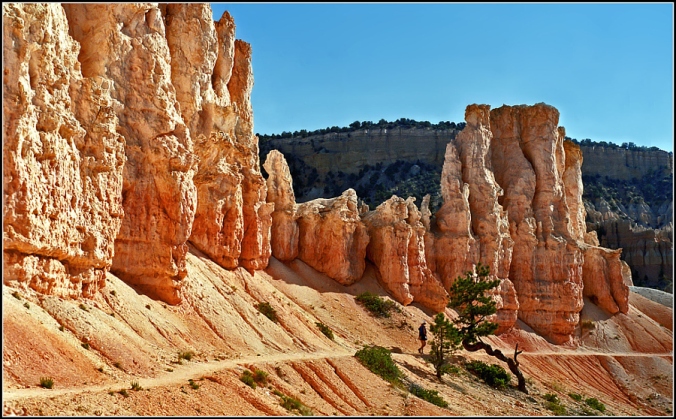 I’m not a fast runner. My days of seven-minute miles are long past. In a tough trail environment, I’m happy with a ten-minute pace. The Fairyland Loop? It took around 1:50. I didn’t get a clean read on the time because I started from my cabin door. An extra half mile or so on either end.

After I finished, I tried to look up the Fairyland FKT, and I couldn’t find one. My time is known! It’s 1:50 (ish). Until someone else weighs in, the FKT is mine. And if you’re able to beat that time (which given my performance in the races I enter, is about half of the trail running population), I don’t want to know about it. I’m happy with my run.