My workplace is large. It’s a community center: a weight room, basketball courts, aerobics rooms, swimming pool, child care center, coffee shop. Tying it all together is a long, straight hallway—a hallway I travel several times a day. Gazing down the hall, I can be seen walking with purpose… on my way to get things done… punching myself.

I ball my hands into fists, my knuckles, sharp, protruding; I hit myself repeatedly as I walk—just below my hip, high on my outer-thigh. Maybe a couple of times every thirty seconds, maybe more, sometimes less. I need to do this. I’m a runner. My legs are tight. The sharp impact helps to loosen my muscles.

No one’s ever mentioned this to me, but I’m sure people notice. It’s twitchy behavior. Spastic.

But nothing can be done. If I don’t punch my thighs, the muscle just gets worse, it feels tighter. The desire to punch my thigh grows. The longer I don’t punch, the more I need to do it. But in truth, I don’t even think about it. I almost never realize that I’m punching myself, I just do. Like you would scratch your pinky if you had an itch. Oh, I do that too, all the time. Sometimes I scratch it raw.

These are tics. Involuntary movements that are associated with Tourette Syndrome. Tics can also be vocal. In fact, both movement tics and vocal tics are required for a Tourette diagnosis. My primary vocal tic is a low trill in the back of my throat. A sustained grunt. And every now and then, I’ll repeat a phrase over and over. This might be a tic, or I might just be obnoxious. Sometimes it’s hard to tell which.

Calling tics “involuntary” is misleading. It makes it seem like I have no control—like a scene from a bad sci-fi movie. As if some external force grabs my hand and makes me punch myself. It’s not like this. When I’m thinking about it, I consciously punch my thigh. I consciously scratch my pinky until it bleeds. I’m the driver of the train, not the passenger. With Tourette, there’s a buildup sensation. The longer I resist, the higher the desire to tic. It’s like an itch—it’s not imperative that I scratch it, but it goes away when I do. For a few minutes… or a few seconds.

The itch analogy is prevalent. If you Google “Tourette tics,” the page you land on will at some point make the itch comparison. Right now, this is ironic for me. I’ve just picked up a new tic. My first new one in eighteen months. And it’s actually an itch.

I don’t know what causes my tics to come and go. They don’t change frequently. My leg punching has been going on as long as I can remember. Scratching my pinky and my wrist has been around for a few years. The grunting started spontaneously five years ago. Before that, my principal tic was eye-rolling—serious, sustained and ugly eye movements—hard to ignore. That mostly went away when the grunting started.

Some tics are preferable to others. I happily traded away the eye-rolling. It made those around me uncomfortable. The grunting might too, but it’ easy to pretend you don’t hear it. And I only do it when I think I’m alone.

While I don’t know where these tics get their life, I fully understand when I’m most likely to tic. Stress. The higher my stress, the twitchier, the noisier, I become.

I just put in my resignation at work. I’ve been at the community center for eleven years. I’ve had a good run. Uniformly, I’m respected—everyone thinks I do a good job. I’m walking away from a good thing. Right after my announcement, the itching started.

First it was just in my armpits. After a couple of days, it spread to my chest. Then my sides, my right hip, my back, my shoulders. Each itch reminds me of a mosquito bite. A specific tickle that needs to be addressed. It itches until I scratch. And then it itches again. 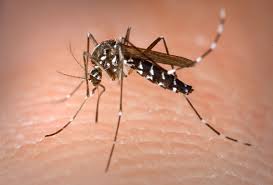 It’s not lost on me that the itching started on vacation—when I was actually getting a lot of mosquito bites. I worried about them. We were in Puerto Rico, and Zika is prevalent there. Each bite brings with it an infinitesimal chance of contracting Guillain-Barré syndrome—an illness that can permanently damage nerve cells. I didn’t think I was overly concerned, but as a family, we were definitely trying to minimize bites—we wore repellent, we tried to kill the mosquitoes that made their way into our house.

Now, ten days later, the itching is unabated. Some of the itchy areas are getting a little ragged, over scratched. I’m worried they will wind up as raw as my pinky on a bad day.

I turned in my emergency paperwork at my new job the other day. Along with hearing loss and terrible eyesight, I listed Tourette Syndrome as one of my medical conditions. So far, it hasn’t affected my ability to perform at work, but if it ever does, I want it to be on my record from the start.

9 thoughts on “An itch I gotta scratch”

Follow The Other Stuff on WordPress.com
Join 4,319 other followers