Mothers’ Day: a topic deserving some real estate on my blog, thoughts about mom. But not my mom, Decades ago, she got sick, and then she got sicker. She’s been dead for thirty-three years. I’ve already written about her, twice.

Elyse isn’t her name. I made that up. Have you ever tried to assign a name to someone? I struggled with Elyse. I kept drifting towards plain names, biblical names: Rebecca, Elizabeth. They didn’t feel right. I needed something sophisticated. Elyse, the person, isn’t sophisticated, but I think the intention was there.

As new parents, we envision a life for our children, a life richer than ours. Maybe easier, or more educated, or happier. Being set up with the right name is an important part of the process. Elyse, I’d say, falls into the ‘right name’ category.

She’s been around as long as Eli’s been in school. So eight years now.

Each year, the elementary school kids put on a pageant called Fine Arts Night. The classrooms take turns singing and dancing to popular songs on the stage in the cafeteria. The parents sit in the audience on folding metal chairs placed too close to one another and record the show on their cell phones.

When Eli was in kindergarten, I first saw Elise in the audience, chatting with the other parents, projecting knowledge. Others seemed to look up to her. I classify parents into two categories. Those that have their shit together and the slackers. I’m a slacker. I show up at Fine Arts Night because I’m told to. I never really knew what was going on in the school. The academics, yeah, I got that part. But the extracurricular stuff? The pageants and the fundraisers? No clue. Nobody looks to me for answers. Elyse was the sort of mom you would approach while walking into the auditorium and ask where you’re allowed to sit.

She was thin to the point of being gaunt. Her blonde ponytail pulled back so tight it was hard to tell where her scalp ended and her hair began. But her severe looks were offset by preppy attire. Capris or khaki shorts and sleeveless collared shirts. A nice mom. A suburban mom. Maybe the PTO president mom.

Does it seem like I’m obsessed with her? Repetition breeds familiarity. For our entire elementary school experience, she was present. Every time I picked Eli up at school, she was at the front of the line helping the teachers organize the parents. At the Harvest Night Festival, she ran the pumpkin painting table. At Bingo Night, she checked over the winning cards. She operated the cash register at the book sale. For more than a year, I thought she was a school employee, not just a do-gooder volunteer. 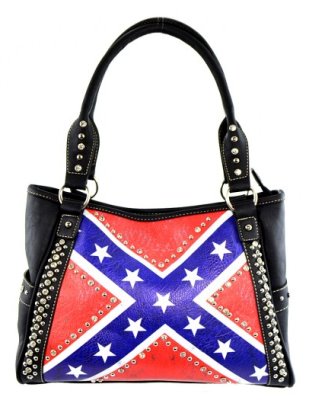 This is called a conceal-carry purse. The idea is that you pack your gun in here,

About a year ago, I saw her at the grocery store. She was carrying a leather purse emblazoned with a Confederate flag. Gettysburg, Pennsylvania is ground-zero for the Confederate flag debate anywhere north of Georgia. Because our national park battlefield is equally split between celebrating the Union and Confederate armies, the Confederate flag is omnipresent. It’s flown in gift shops, on pickup truck bumpers, and on t-shirts.

My family’s favorite ice cream shop is in the midst of the tourist strip. We buy our treats and then walk along the street, people-watching and browsing the souvenir garb displayed outside the gift shops. Heritage Not Hate is a common t-shirt design: a Confederate flag with that slogan underneath. The idea is that by displaying the flag, we are honoring our southern ancestors, and not the abhorrent values for which they fought.

Maybe, but probably not. I’ve never bought that argument. I believe that if the majority of African Americans (and countless others as well) equate the flag with oppression and slavery, then that’s what it stands for. Regardless of your intent, you’re offending people with your flag. You’re displaying hate.

In Gettysburg, the Confederate flag is embraced by a sizable chunk if the population. They are the men driving around in pickup trucks with White Lives Matter bumper stickers. And they’re the bikers clad in leather identifying with the “rebel” in the Confederate Rebel Army. Elise has joined this group.

Since Eli moved into middle-school two years ago, I haven’t seen Elise at any school functions. Maybe because the kids are older, there’s less need for her to help out, or maybe she simply no longer wants to be a volunteer. But on Thursday night, I saw her at a middle-school concert. I guess Tristan’s in band with Eli. Elyse was with a guy I’d never seen with her before. They were wearing leather vests with a Confederate flags spanning their backs.

I’ve caught myself thinking about Elyse several times over the past couple of days. Her transformation is astounding. She’s traded her capris for leather, and all that leather seems to display the flag. Is she a recent convert to the Confederate crowd, or has she been there all along? Did she meet someone new and change her personality to assimilate with his crowd? Or has Donald Trump emboldened Elyse and her friends to now wear their flags in the grocery store and the public schools?

I’m a storyteller. I tell them on my blog and I tell them in my head… all the time. When I’m around people I don’t know, I have a tendency to make up their lives. I’ve done this with Elyse for the better part of a decade, but now I’m changing her story.