My thirteen-year study: the effects of age on an athlete’s performance.

I’ve recently expanded my use of the term athlete. There was a time I would only use it to describe an elite crowd. The professionals, the college stand-outs, the runners who win races but still need a day job because running doesn’t pay the bills. These guys, these men and women, they’re clearly athletes. Peak performance, top of their game, all that crap.

Recently, I’ve been using athlete as a term for anyone who competes. The Merriam-Webster dictionary agrees with me: a person who is trained or skilled in exercises, sports, or games requiring physical strength, agility, or stamina. They make no distinction for professionals or for NCAA Division I players — most of whom are recruited to attend college specifically for their athletic prowess.

Merriam-Webster even takes it a step further. They offer the title to anyone trained or skilled.

My study kicked off when I moved to Gettysburg in 2005. I was exercised-focused before the move — in my twenties and thirties, fitness was my first priority. I ran (a lot). I ran the monuments of Washington, DC. I ran the biking trails adjacent to the Potomac river in Northern Virginia. I ran the C&O Canal towpath out of the city and into suburban Maryland. And I ran the wooded trails interlaced through DC’s Rock Creek Park.

But by the time I hit my forties, back in the early 2000s, my primary exercise was the walking part of my daily commute. A couple of miles — out and back from the Metro. Home ownership, a challenging job, and a new-born baby gobbled up all of my time.

Gettysburg is a paradise for runners. Twenty-six miles of park roads, eleven miles of hiking trails and endless country roads radiating out in every direction. Runners have countless routes to choose from. With my move, I joined the ranks of the remote work-force. Suddenly I had no commute. After work, I was free to lace up for a run before dinner.

I’ve never been an awesome athlete. In general, I’d call myself competent. In school and as a young adult, my sport was soccer. I played two or three days a week. Another player, once asked about my skill, referred to me as “Good-ish.” And as a runner, good-ish works as well. I’ve spent most of my career in the mid-pack.

Gettysburg is a small town. Every road out of Gettysburg leads to a city — Carlisle, Harrisburg, Westminster, Frederick — but each city is fifty or sixty minutes away. Gettysburg is a rural exburb situated right in the middle of nowhere. Here’s something city folk don’t know. People living in small towns know way more people than those living in a city. Because I see the same people over and over again, every day, every week, I seem to know pretty much everyone.

One thing’s for sure, I know all the runners. Or I used to. 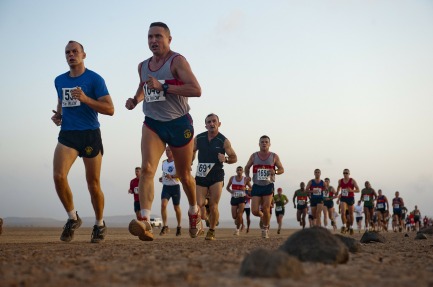 Eventually, I wound up working at the YWCA as its Finance Director. The Gettysburg YWCA is a fitness center, a child care, and an advocate for women’s issues and racial justice. It’s also ground-zero for the local running community. Hosting three 5Ks each year, those of us who helped manage the races knew all the area’s top runners. Over the thirteen years I’ve been associated with the YWCA, I’ve watched the arc of many running careers.

Yesterday, I went for a run after work. I ran my current favorite route — a series of paths zigzagging across Pickett’s Charge. Pickett’s Charge is a huge field and one of the principal landmarks of the Gettysburg Battlefield. It’s the site of the Confederate Army’s last offensive in the battle. Essentially, it’s an uphill slog across a mile of open space. The Confederate Army got creamed, and this defeat is said to be the turning point of the Civil War. The Union Army rode the momentum of this win through the end of the war.

I’m completely uninterested in Gettysburg battle-history. From my perspective, this is just an excellent place to run. I don’t know how far my route is, I’ve never measured it. And I don’t know how fast I’m running, I don’t wear a watch. I just go out and enjoy my run. This is where I am in the arc of my running career.

I no longer work at the YWCA, but last weekend, I wound up working a race. The Spirit of Gettysburg 5K. I heard they needed volunteers, and I said I would love to help if I could be out on the course. Over the past thirteen years, I’ve seen this race from every possible perspective. I’ve caught glimpses of the race from the parking lot where I’m still directing traffic even though the starting gun has already sounded. I’ve called time at the one-mile mark: 5:54, 5:57, six minutes, 6:03… I’ve watched the top runners battle for the lead in my rearview mirror as I drove the press truck around the course. This past weekend, I handed out plastic cups of water as runner cruised by.

There were five of us passing out water, and in a 5K, half the runners don’t even drink. My job was completely stressless. Mostly, I just enjoyed the race. I was able to cheer on the runners, the runners I’ve known for years.

And where were my runners?

Allison: for years, she contended as the fastest female, annually earning a chunk of the prize money. This year, she’s further back, a dozen women out-pacing her. Seth: I think he took third place overall a couple of years ago. Whoa, that guy’s really put on some weight. Tina: she usually wins her age group. Now she’s running mid-pack and not looking so great. Joan: something’s up with her knee. She walked the course this year. And Jason: So wracked by injury, he skipped this year’s race for the first time in twenty-six years.

During my weekly run on the battlefield, I try to keep loose, relaxed. My pace is minutes per mile slower than it was ten or fifteen years ago. And while I was running twelve or fifteen miles at a shot just a few years ago, I now consider four-miles to be sort of long. We age. We age out of our abilities as athletes and we’re forced to adapt. As we slip over those decade milestones and enter a new age group, we’re given new opportunities to compete and excel, but never at the level we did in the past.

Before I realized this was happening, I used to try to meet and beat my previous years’ time. Sometimes I do, but year after year, I can’t. And when I try, I wind up injured. My approach to running has changed this year. I’m happy jogging, and in truth I’m happy walking. I’m doing far more walking than running these days. I’ve decided that consistency is more important to me than competitiveness. Being outside doing something, anything, is my number one goal.

I’d love to sit down with Allison, Seth, Tina, Joan or Jason. I’d love to find out how they feel about their changing relationship with running. Are they still chasing their personal records or are they at peace with the descending arc of their athletic career? For the first time in years, I’m content with my running. I’m not trying to achieve anything special. Not distance, not speed, I’m just going for a run.

22 thoughts on “Arc of an Athlete”