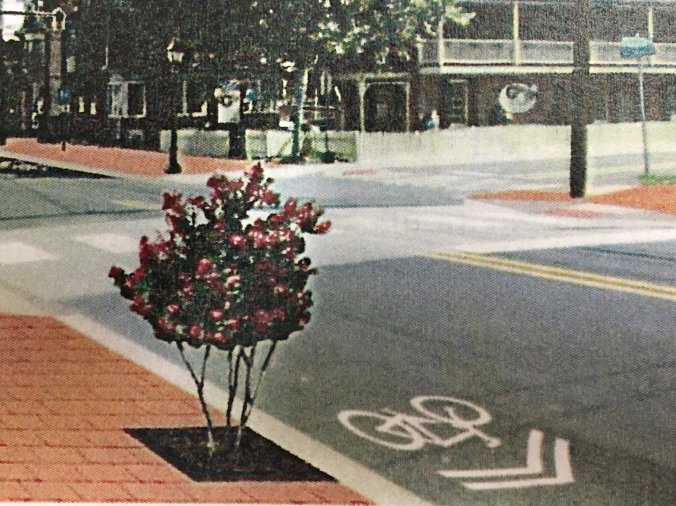 The quality is horrendous, for that I apologize. This picture lived a tough life. It’s a photo of a photo in a photocopied copy of a city planning pamphlet. I planned on writing this post weeks ago, but I never went out to take the necessary picture. I could have found a picture on the internet, but I’m trying to stop stealing content. I’ve recently learned how upset this makes people.

Stealing content: Maybe you’ve heard about this, possibly read it on a blog: a website called Tygpress.com lifted and republished content from countless WordPress blogs. I don’t know many more details, I read about it briefly on a blog I follow. The author and several commenters were upset that their blog posts were stolen. I made no friends by weighing in that I doubt it would bother me if I found my stuff on their site, it’s already posted on the internet for all to see.

Here’s my thought process—I give away my blog posts, I give away my books, I have a separate blog that is 100% anonymous. I’m not looking for attribution or income, I just want to be read. “But they’re making money on your content” you say. Well good for them, I guess, I already determined that I can’t. Possibly I’m so lackadaisical about this because I, too, steal content—pictures, not words, to pretty up my blog posts—or should I say stole content, because I’m trying not to do that anymore. You might argue that I’ve just done this with the photo I stole from the city planning document. What can I say, it’s in my blood.

Back to my post: A month ago, I was riding my bike to work. Before you applaud me as an environmentalist or a badass, you should know that I was only doing it because my daughter Sophie wanted to use my car, plus it’s only a mile. Also, I haven’t done it since because the next day I pulled a calf muscle, and then I pulled a chest muscle, and then I threw out my back. It’s been a bad month.

On my ride, I passed a sharrow. This is that bicycle/arrow painted on the street in my stolen picture. This symbol is intended to let the car drivers know that bicycles belong here. They should share the road. That seems kind of nice, right? It has to improve safety, or at least decrease aggressive driving by annoyed commuters stuck behind a slow-moving bicycle for three blocks. It’s a helpful gesture.

No, if I had my way, I’d cover it with tar. Thirteen years ago, as a known cyclist in the Gettysburg community, I was invited to help map the town for bike routes. Twenty other cyclists and I took highlighters and drew on a huge Gettysburg map the roads where we most frequently rode our bikes. They were going to make Gettysburg a bike friendly town, and this mapping exercise was step one.

Last fall, they completed a bicycle bridge. It’s very pretty. It’s made of green steel and reddish board planks that are actually made from recycled plastic. You can tell just by looking at it that it cost a fortune to build. Impressive, right? Not really, it crosses a small stream. It’s in a middle of a block, so really you could go twenty yards in either direction and cross the same stream on a road, but this looks really nice, and it screams bike-friendly town. The only other trail building they’ve performed in those thirteen years is to paint a sharrow, one sharrow on a road. As it turns out, it’s one of the roads I mapped, so I guess I feel like I was heard. But really, one sharrow?

Here comes the rant: Whenever I ride my bike over that sharrow (which, due to my various injuries, isn’t often) my blood pressure spikes. Drivers are told to share the road. Where? Right here. Nowhere else in the whole town. The message I get from that sharrow is “No, we don’t belong. We’re only supposed to ride where someone paints a bicycle.” In many countries, bicycles are as prevalent as autos. They can share all the roads because bicycles are treated as vehicles, not toys. As Gettysburg rolls out more of these sharrows, a handful of prominent roads will be deemed bike friendly, everywhere else, I’ll be I the way.

That picture above is the road right outside my office. It’s an artist’s rendition of what Gettysburg will look like in the future. You might notice there are no bikes in the picture, and there aren’t any cars either. And what they conveniently left out is that in ten more feet, street parking begins and the bike lane will completely disappear. I’m okay with that, I don’t mind riding in traffic. I just hope that the drivers don’t mind riding with bikes when we don’t have a lane of our own.