There’s a certain type of guy who sells his pick-up truck for cash. I’m not that kind of guy. That guy is worldly, capable. He’s the sort of guy who can pop open the hood and spot the trouble areas. Me? I know where the gas goes. I can change a tire, but it will take me an hour to do so.

At one point, I was worldly, in a cityish soft of way. I jaywalked. I could parallel park with a couple of inches to spare. I didn’t flinch when a gang of teens approached. I’m no longer a city guy. I’m small-town. Wet behind the ears. I’m out of my depth in the city.

But I’m not that country either. Country guys are the ones who sell their pick-up truck for cash. A couple of weeks ago, I went to a meeting. As part of the orientation for my job with a domestic violence organization, I was required to attend a batterers support group meeting. Yes, you read that correctly. It’s a support group for men who have beaten up women. Because I was representing my company, I wore my outfit from work. Tan dress-pants, a polka-dot oxford, and my robin-egg-blue vee-neck sweater. I spent two hours feeling like a priss.

The men in the meeting were all tough-guys: ratty jeans and camouflage cargos. T-shirts and flannel. Even the counselor. Everyone had a beard. After fifteen minutes, I shrugged back into my sporty raincoat. Not much tougher, but anything to disguise that polka-dot shirt. These guys buy and sell cars with cash.

This morning I sold my truck. Or at least I set the wheels in motion. A guy gave me a crisp hundred dollar bill and a handshake. He eyeballed the frame. He popped open the hood, started the engine and listened for a minute. Then he pulled out the cash. Worldly. Capable. We’ll finish the deal on Monday. In Pennsylvania a notary’s signature is required to sell a car. This isn’t available on a Sunday in Gettysburg.

I pulled out the title this morning. I’ve been wondering how long I’ve owned my truck. It seems like an eternity. I bought it when Susan went to massage school and I needed something to drive while she was in class. She’s been a massage therapist for, like, forever. As it turns out, this phase of my life started in 2011. In those seven years, I only drove nine thousand miles in the truck.

Have you tried Facebook Marketplace? I’m pleasantly impressed. I posted my truck advertisement last night at dinner time; I had it sold by breakfast. According to Facebook, four hundred people viewed my ad. I haven’t heard much about Facebook Marketplace. But I read about Craigslist all the time. That’s where criminals find random people to murder. Susan was worried that I was giving our address to strangers on Facebook.

The guy who bought my truck was a gentle older man. He has the same model at home, and it needs some parts. It once belonged to his son, but now his son is dead. I think keeping his truck on the road is some sort of a metaphor. I’m just glad my truck isn’t going to someone who needs reliable transportation. The guy who bought it, he knows what he’s getting. 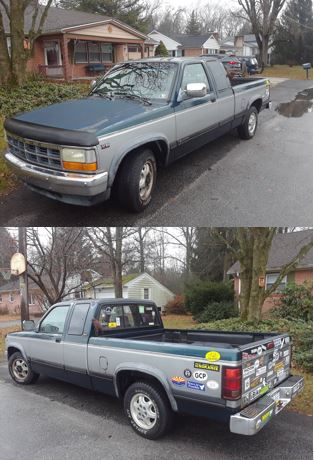 What he’s getting is a twenty-five year old piece of crap held together with bumper-stickers. For seven years. every time I drove it outside the Gettysburg town-limits, I experienced an anxiety attack. The only time I drove it for more than an hour, the radiator failed–leaving Sophie and me stranded on the side of the highway.

This morning on Facebook I posted this picture with the message “So long, old friend.” And an old friend it is. The sort of friend you love even though he’s unreliable. You love him because he has character, because he makes you a better person.

For seven years, this truck has been my signature look. A way to easily identify me out and about. Now I’m in a minivan.