“Why do you want that picture so badly?” This is Jess, I work with her. I’ve lined up this shot at least seven times. It’s of the vendor-booth across from ours. Every time I’m ready to snap the picture, the wind blows and flips one or both of the signs sideways. I put down my phone and wait until the day grows calm.

I’m still learning how to use the camera on my phone. I’ve had it for a couple of months and to date, I’ve only taken twenty-one pictures. Sixteen of those were on Saturday. I’m a neophyte.

I got rid of my last phone in 2005. I switched jobs, and since my phone was work-issued, I had to give it back. It was a flip phone, it didn’t have a camera.

Over the past thirteen years, I’ve watched a cellphone-evolution roll across our culture. Right, we all have, but since I didn’t participate, I might have watched it more closely. When I gave up my work phone, nobody blinked. Texting wasn’t common, everyone had a landline. Many of my friends still didn’t have phones.

If you’re an adult, you know that things quickly changed. Five years later, people were clearly shocked, but pleasantly so, by an adult without a phone:

That attitude only lasted a few years. More recently:

Now I’ve got an iPhone.

I don’t advertise the fact that the phone is new to me, but sometimes I still need to ask for help. “Jess, how do I send this picture to my email?” 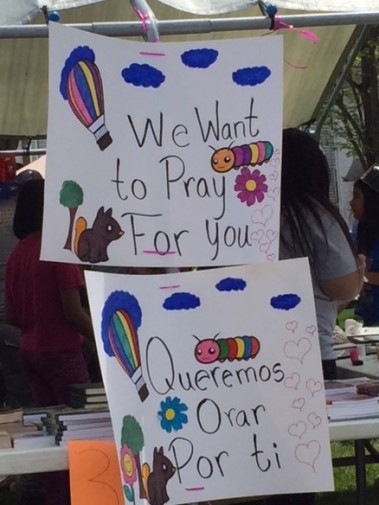 Why did I want that picture? It’s my writing prompt. As I was heading out the door on Saturday morning, facing seven hours of booth-sitting at a Latino themed Kids’ Day festival in the neighboring town, Susan suggested that I take a notebook with me. She thought I might make some interesting observations during the day. Something I might come home and write about.

So, what does a sexual assault/domestic violence non-profit do at a kids’ festival? Not much. We don’t talk with the kids about assault—sexual or otherwise. For the most part we don’t talk about this with the parents either. We had only three conversations all day that I’d put in the awareness category. The rest of the time, we gave crap away. For a while we had these cool key-chains with a built-in flashlight. Those were popular. We also had a small notebook with #NoMore emblazoned on the cover. Not as popular, but they still disappeared. When the good stuff was gone, we offered a homemade coloring book in English and Spanish with scenes depicting body-safety for kids. Not so popular.

The booth directly across from mine was run by a bilingual megachurch. Where we had three people poised and ready to talk with questioning festival attendees about rape and battering, the megachurch across the way had twenty-five people hanging around waiting to talk about Jesus. Their booth was huge—maybe five times the size of ours. They offered free books, face-painting, movie theater bags of fresh-popped popcorn. and at one point during the day, free pizza. They even had a clown. Jesus got way more play at Kids’ Day than domestic violence.

What did I do all day? What I didn’t do is talk with my coworkers. One of the four speakers for the sound-system was directly behind our booth. It was too loud to carry on any conversations. All day I listened to an eclectic mix of classic rock, current hits and Latino pop music. I learned that I’m a pretty big fan of Latino pop music.

So, I sat and watched the crowd, looking for writing prompts. I’m sure there were many, but since that megachurch was front and center, that’s where my attention was focused—I got that one picture.

As I sat and ate bag after bag of Christian popcorn, watching parents and kids go booth to booth looking for something interesting to do, I realized how dull these children’s festivals are. When my kids were young, we went to events like this all the time. Free crap, food giveaways, loud music and general confusion. These festivals are popular because they give young parents something to do in public with their kids.

After all the morning activities are complete, parents face a long afternoon of trying to entertain their kids, preferably without a TV or a device. A few hours in a park with a couple hundred other families removes the sense of isolation that parenting can create. At least that’s what I remember from a decade ago, when my kids were two and five years old.

Parents of toddlers are in transition. They’re close enough to the carefree days of childlessness that a sense of mourning can still be felt. On a cloudless spring day, memories abound: lingering brunches at outdoor cafes along the riverfront; long bike rides around town, no schedule and no destination, exploring; festivals, not so different from this one today, except the booths offer art and samples of wine, the music skewing towards hillbilly-folk.

This is what I thought about during my day of work at the Kids’ Day festival. Susan’s friend Anita makes artisan paper. Using recycled newspapers, water and something sticky, she makes paper-pulp in her blender.  She then pours the concoction onto cookie sheets to dry. Once ready, she cuts the paper into interesting shapes, she frames them between glass and sells the final product for a small fortune. We have a framed tree in our foyer. It’s beautiful.

Anita works art festivals from May until November. She spends every weekend under a tent, just like mine, talking with strangers. But she likes people. Unlike me, she finds conversation easy. Plus, she’s talking about art; I’m talking about abuse. But mostly, I watch the megachurch paint faces. Hopefully, they’ll pray for me.