It’s the same fight every time. Once, twice per year, depending on how frequently we get together. Thanksgiving and/or Christmas. Fight is too strong a word. Argument; disagreement; squabble—one of those might be a better fit.

These are the holidays that bring Susan’s family together. Her sister lives in Maine, her brother in Massachusetts. Susan’s parents live here in Gettysburg. The majority of our gatherings are right down the road. My nieces and nephews drive eight to eleven hours to visit; my family drives two minutes. On occasion, we all gather in Amherst, Massachusetts. My family grudgingly makes that trip, but none of us likes time spent in the car. We’re selfish that way.

The mid-afternoon dinner on these holidays is identical. Turkey, stuffing, potatoes, gravy. Corn, Pillsbury rolls, and a really foul carrot concoction that my sister-in-law’s parents loved. Holidays are about tradition, and carrot goulash is one she won’t abandon.

Susan and I marvel at the effort that goes into preparing this pedestrian meal. An entire day spent making a dinner that replicates what I might have eaten at Hot Shoppes Cafeteria any night of the week when I was a kid. Left on our own for one of these holidays, we expend way less effort and wind up with a far more enjoyable meal—artisan pizza or Mediterranean chicken kabobs or homemade pasta.

Many families around America fight during the meal itself. Politics, religion, race relations: these are some of the topics on which siblings, separated for decades, might differ. And our dinner table isn’t void of these discussions. The political spectrum of our group spans from not-quite-extremely-liberal to moderately conservative to I-voted-for-Donald-Trump-because-he’s-going-to-make-America-great-again. Yes, we have our arguments.

But the real disagreement begins when the meal is over and the dishes are washed. This is when football monopolizes the remainder of the day.

The most common adjective people use to describe Susan is Namaste. Which loosely translates to “I honor the light within you.” She radiates peace. She oozes kindness. As a massage therapist, these are awesome qualities that have helped her build and sustain a thriving practice. As a family member in an argument over whether football is too violent, these qualities are simply annoying.

Have you been to a football game? It’s been decades since I’ve been to a professional game, but I frequently go to high school games. Sophie plays flute in the marching band. To see her perform, Susan and I need to pay ten dollars and endure two quarters of sub-par football. As we watch the game, we listen to the crowd; we take note of what they’re saying. Know what they say? “Kill them.” They say it over and over.

This is what Susan talks about on Thanksgiving and Christmas evenings, while the rest of her family is glued to whatever game happens to be on the TV. “Violent games breed violent tendencies and aggressive attitudes,” she says. My kids have been hearing this argument since they were toddlers. They’ve embraced this stance. Like their mother, they rag on their cousins about the inherent violence in football.

Do I believe this? Undeniably. Screaming “Kill them” at a bunch of children is unconscionable. It’s also as American as an NRA membership and apple pie. But then, I like Arnold Schwarzenegger movies, so who am I to talk. My primary complaint with holiday football is that we get together once or twice a year, and all we do is stare at the TV screen. Plus, I think football is boring. Now if we were watching soccer…

Susan admits that she might just be reacting to the noise of TV. Neither of us really watch any TV, and our set is never on. Ours is a quiet household, and the constant chatter of a televised sporting event sets us both on edge. But ask anyone in her family, it’s the violence and aggression of the sport that Susan harps on. 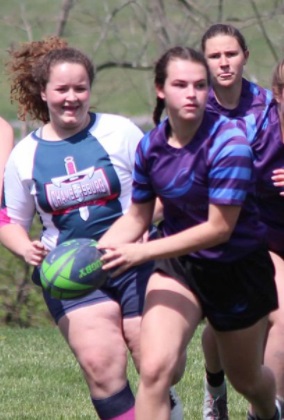 So, here’s the great irony of 2018. Sophie is now playing high school rugby.

We encourage our kids to make their own decisions. When Eli wanted to join Scouts, we said that was fine (even though it wasn’t). When he wanted to quit Scouts, we were OK (and secretly relieved) with that too. They try activities: drums, guitar, wood-burning, karate, horseback riding, art. Some stick, some don’t, but we feel that each experience makes each of our children a little fuller, a little more worldly, a bit more enriched by life. Rugby is just another activity on the continuum of experience. Until last week.

In every game, someone gets hurt. We’ve had broken bones, blown-out knees, knocked-out wind, bumps, bruises and scrapes. It’s a rough game. In fact, it’s an awful lot like football except there are no pads to protect the players. They push, shove, grab and tackle, and as the season progresses, they’re getting much better at the tackling. The parents on the sidelines are left speechless, mouths agape, when their diminutive, sweet angel of a daughter, her pony-tail bouncing behind her, chases down and drops an opposing player in a mess of dust and oomphs and tangled limbs.

Last week, it was Sophie’s turn. A routine play, a simple tackle, but she and another girl bumped heads. Sophie, sprawled on her back, holding her face, writhed in pain. The other girl, lying on her side, silent and still, got the adult attention. After a minute Sophie got up to check on the other girl, and then she turned to face the spectators. An egg, visible from forty yards away, sat on her forehead.

In my childhood of competitive sports, head injuries and concussions were commonplace. It was an expected part of competition. I’ve been knocked out cold at least four times and maybe as many as six. But things are different today. We’re more aware of the cumulative damage from repeated bashes to the head. We now know it’s wise to minimize concussions in our children.

Since last Sunday, Susan has been trying to come to grips with the intersection between fun and violence. Is rugby an exciting and challenging sport or is it the embodiment of aggression in our society. Neither of us want Sophie to injure herself—to damage, permanently, her knee or her brain. But at the same time, we want her to have the opportunity to try new things. We want her to have fun.